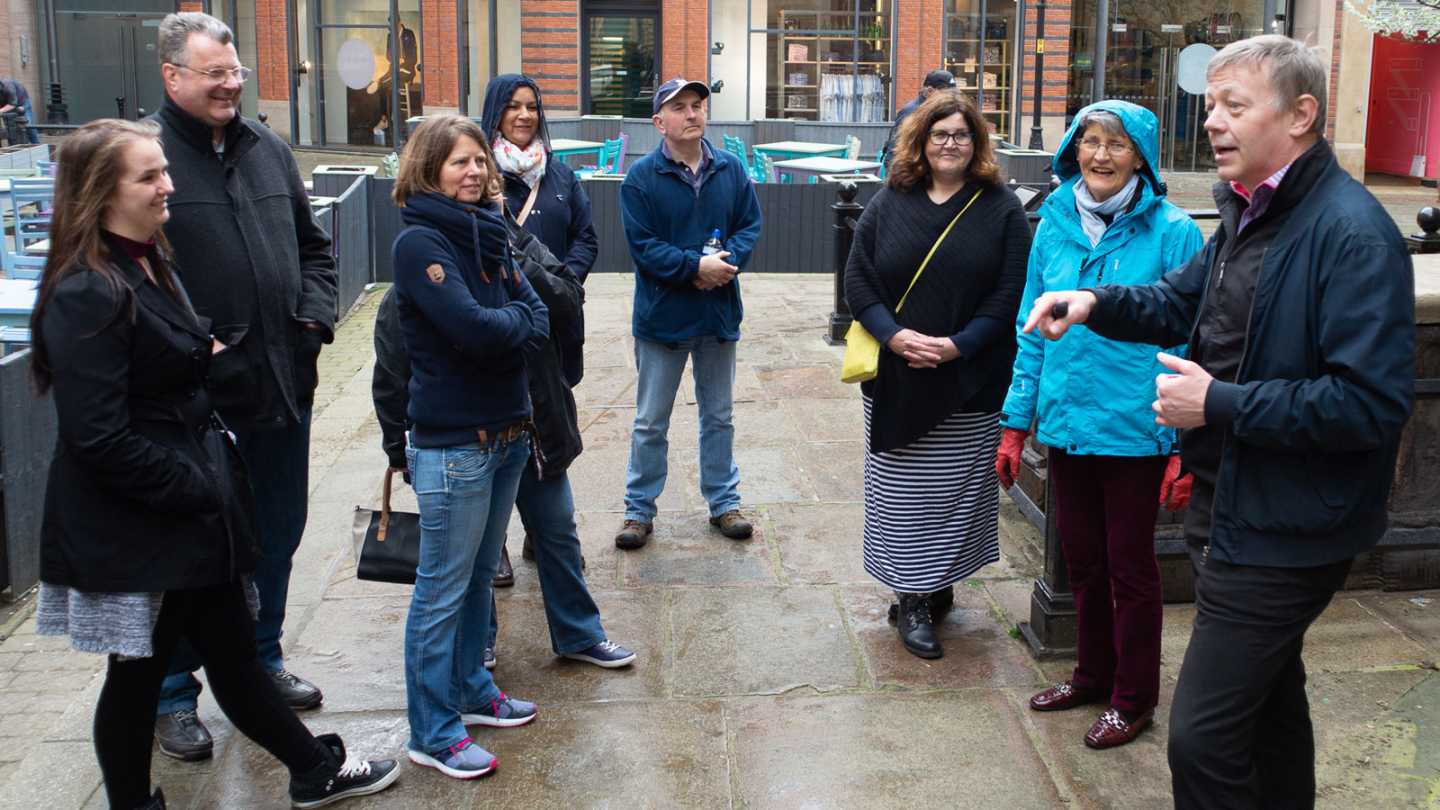 Members of the Bowdon Business Club recently attended a social networking event in the centre of Manchester. Organised by the current social secretary, Richard Whitehurst, the Tutor doctor, it was the second event this year.

Here at Bowdon Business Club we feel we have the balance just right. Some business clubs are all work and no play whilst others seem to just focus on the socialising and are not so serious about growing their business.

We believe in building relationships which lead to longstanding partnerships and referrals which are meaningful and worthy of people’s valuable time.

The first tour was `Manchester's Haunted Underworld Tour`. Members met in St Ann's Square and were first taken to the site of St Ann’s Church where Jonathan provided an interesting insight into the history of the church including tales of the demise of those who lie beneath the paving slabs.

Entrance to the huge network of underground passages was made by the entrance to the Barton Arcade which was built on the site of an old house. Jonathan led the way past many chambers in the darkness and told several stories which had been passed down over the years. With just 3 tiny red lights to illuminate the way it certainly was a spooky but bonding experience! Back in daylight and led down Deansgate, the enormity of the underground maze became apparent when the other exit finally became visible quite some distance away!

There was a short break for lunch before the beginning of the second tour.

Members were astonished to discover the extent of the Mayfield Station building.

The second tour took members around Manchester`s most spectacular abandoned building - The old Mayfield Station building. Sitting on a massive 24 acres right in the centre of Manchester just behind Piccadilly station many confessed to not having noticed it before in the rush of everyday life! Opened in 1910, Manchester Mayfield was built alongside the existing Manchester London Road station, which opened some 70 years earlier and renamed Piccadilly in 1960, to handle the increased number of trains and passengers following the opening of the Styal Line in 1909.

Jonathan led the way behind the massive hoardings which now circle parts of the building through a courtyard and into the vast area which was breathtaking. A huge surprise lay ahead. Massive iron columns held up the platforms above, fairy lights added to the wonder of the space. Now used occasionally for film locations and events this beautiful space is sadly soon to be demolished. A gentleman also on the tour explained to the group how he used to work beneath the platforms in the `70`s processing mail order returns for the catalogues popular in the day. A vision which could be imagined - a busy hive of activity quite a contrast to the deserted quiet derelict space now occupying the area.

Stories of its invaluable function during the war for housing the wounded soldiers who descended on Manchester in their thousands conjured up similar visions.

The second part of the tour involved a trip up on to the now derelict platforms with the self-seeded birch trees showing the only signs of life. Ancient Images revealed the station in its prime, with steam trains sitting side by side with the latest diesel engines of the time. It was a privilege to see this beautiful building, which is an amazing feat of engineering, before its demolition was.

It was super spending time with other members of the business club cementing the relationships begun at the Friday morning meetings.

Jonathan Schofield was an excellent guide, knowledgeable and interesting, the time went very quickly which was attributed to the content. It was great to learn more about this great city.

Thank you to Richard for organising and Jonathan for a couple of great tours.

More in this category: « To Young To Be Incapacitated? GDPR: Employee’s Data, Consent? »
back to top